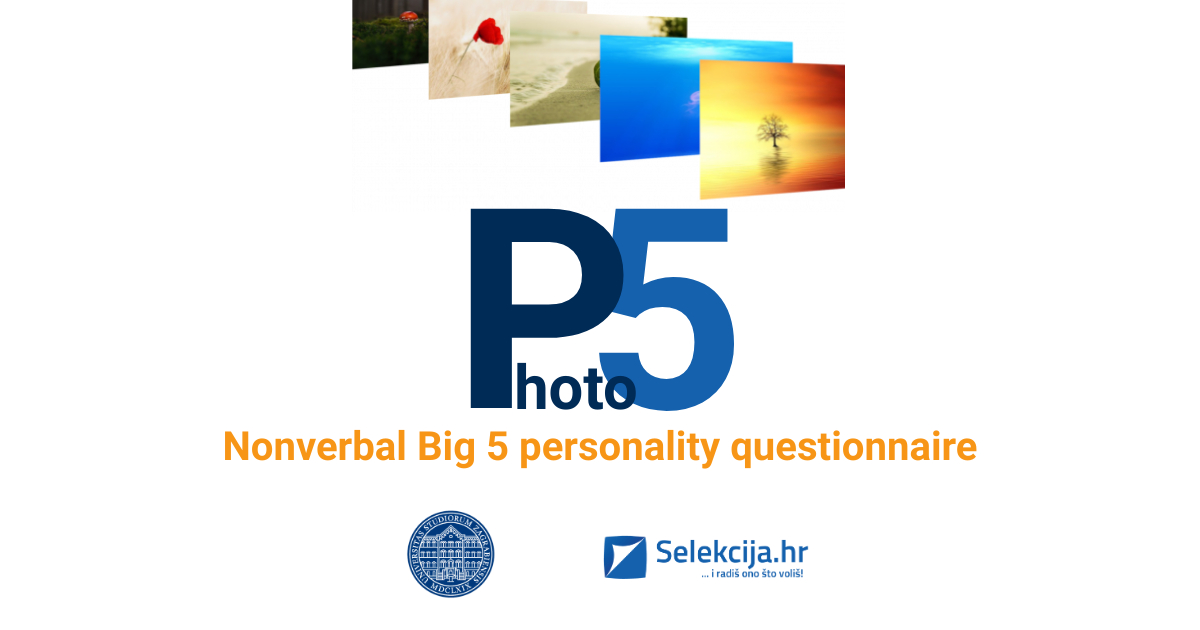 Psychology has found its place in the business world long time ago. Personality assessment, along with cognitive abilities, is one of the basic areas of interest in a professional context. Due to the desire for more successful business, organizations are showing increasing interest in quality psychological information. In recent times, the internationalization of the labor market, dynamism and global digitalization in general, pose new challenges and demands. In the light of technological development, the idea of measuring personality in a new way also emerged. Through the dedicated work of professors from the Department of Psychology at the University of Zagreb and the company Recruiter.hr, a new measure of personality has been developed, the so-called Photo 5. This is a questionnaire in digital form that, instead of traditional questions and claims, relies on photos! More on that below!

Why evaluate at all?

When it comes to employment, namely, many realized in time that work experience and desire for employment are not always enough. The very entry of a new person into the organization necessarily activates the processes of adjustment. Getting a new work team member familiar with his or her business responsibilities is sometimes a really challenging task. It can happen that a newly hired individual soon gives up because he realizes that the job ”may not be for him after all”. Of course, this takes the whole process back to the beginning. Time and resources are wasted on both sides. The price an organization pays to invest in the wrong person is generally high.

On the other hand, the time of adjustment to an organization with which an individual may not actually share work and professional values has also been irretrievably wasted. Fortunately, a quality personality assessment in the selection process itself can solve a lot of potential later problems! The innovative approach, in doing so, seeks to further facilitate and bring the whole process closer to the candidates…

Timely availability of information on some fundamental characteristics of potential new employees can be crucial. Assessing their suitability for the requirements of a specific job and organization is, therefore, an essential aspect of employment. Personality assessment is now traditionally one of the first steps in quality professional selection. Because of the scientific grounding and proven value of psychological tests in a professional context, organizations usually cannot do without them. The personality profile of the candidate contributes to a complete picture of the person. Among other things, it points to the potential for successful adaptation, but also to the growth and development of a person, together with a specific organization.

How an individual will respond to stressful work circumstances, for example, is one aspect that can be predicted. This is where personality assessment comes into play. How well a person will function under pressure can be inferred even before the real appearance of stressors. Dedication to work and the level of thoroughness and perseverance in doing it can also be inferred based on personality profile. And preferences for certain types of work tasks, and dislike for others have the relation with personality.

The whole spectrum of human behaviours and tendencies in reacting to different circumstances can, more or less, be described by personality traits. That is why it is important to know what our candidates are like. Some, due to their personality, probably will not do best in certain activities. It just means that their other tasks simply ”lie better”. The question is what are the needs of the organization/job position and what are the characteristics of the candidate. Is there a ”match”?

If personality assessment can offer objective indicators, why not use them? Indeed, in practice, it is represented by personality measures that have shown their value in the organizational context for many years. Today, in digital environment, perhaps more than ever before, an adequate assessment of a potential employee’s personality is at hand reach. Recruiter.hr digital solutions provide everything you need for a quality selection of staff. Organizational instruments are available in digital form, their application is simple, and the findings are quick and useful. In addition to traditional instruments in the form of a questionnaire, personality assessment is now possible through the innovative Photo 5!

What is it about?

It is a new instrument that uses the assessment of personality and a number of key information that can complement the selection decisions. In an innovative way, the Photo 5 captures the basic individual differences between people. Its construction relies on the generally accepted five-factor model of personality. In short, the questionnaire consists of 50 photographs, selected on the basis of professional and research work, intended to measure the five major dimensions of personality. Namely, research history in the field of personality and professional literature suggest the importance of broad domains of conscientiousness, openness, comfort, extraversion and emotional stability. These five dimensions are in fact the basic units for describing people and explaining personality.

Unlike traditional questionnaires, which involve people agreeing with certain statements/questions, the Photo 5 turns stimulating material into photos! Imagine in the selection process displaying photos related to different traits. Instead of a neatness question, for example, candidates are shown a photo related to this trait. Instead of looking for a degree of agreement with the statement ”I like being among people”, it can be offered a photo that shows just the same thing. All the key things that differentiate people from each other do not necessarily go into claims. Why a photograph could not be a faithful representation of a behaviour or situation, applicable to assessments? This idea guided the construction of the Photo 5 questionnaire. It was built on the foundations of the five-factor model, as a modern instrument in organizational psychology.

Besides being more fun, this assessment of personality implies additional advantages. Given that we are primarily talking about selection situations, caution is always present because of the potentially involved social desirability. Namely, it is logical to expect the tendency of candidates to try to present themselves better in job evaluation situations than they really are. The ability to fake answers to a personality questionnaire can be quite simple. But with photos it is a little different. They appear to be more resistant to socially desirable responses. Namely, the research confirmed that falsification is generally less pronounced in the evaluation of photographs compared to the evaluation by a questionnaire!

In addition, the Photo 5 questionnaire is gaining in value and in the context of the growing presence of multilingualism in selection processes. Since subtle linguistic differences in claim formulations of questionnaire can make comparisons difficult and impair quality assessments, an instrument that eliminates this problem is certainly welcome.

Attachments to the validity of the Photo 5 questionnaire

In addition to information on the candidate’s cognitive abilities, work experience and other relevant performance indicators, personality assessment is now available as data measured in a different way. The photographs that ultimately define the Photo 5 have been carefully selected through expert work and validation research. Starting from the preliminary large set of photographs, those that worked worse for these purposes were successively excluded. Expert psychologists, as well as psychology students, played an important role in the initial phase of photo selection.

The validation studies that followed showed that these are scales of a five-factor personality model that are highly reliable. It was also confirmed that the results of these scales are related to the relevant criteria in the academic and work context. In this sense, the finding of the validation check was performed on a sample of psychology students and on a sample of employees in Croatia. Both studies offered logical correlations of the scales of the Photo 5 questionnaire and the associated scales on personality questionnaires. In addition, personality traits measured by evaluating photographs in the expected way are also related to individual criterion variables.

For example, in an academic context, conscientiousness proved to be related to grade point average, while extraversion was correlated with managerial potential. Likeability is, as expected, positively associated with extraversion, comfort and conscientiousness. Comfort, too, is marginally significantly correlated with competence. In the working context, however, another set of logical findings has been identified. They testify that a personality measure based on photographs can predict important work outcomes. The results on the scales were considered in relation to job satisfaction, work engagement, job performance, undesirable and responsible organizational behaviours.

In accordance with the mentioned findings on the validity of the questionnaire, the authors who worked on its development, professors from the Department of Psychology at the University of Zagreb, Prof. Zvonimir Galić, Ph. D., Mitja Ružojčić, Ph. D., assistant Nikola Erceg and the Recruiter.hr team agree that this is a measure suitable for a dynamic, international and multilingual labour market. Finally, Photo 5 is a psychometrically valid and practically applicable questionnaire that can serve as a valuable supplement or replacement to existing personality assessment questionnaire methods!

Along with market researcher, training and development expert, financial analyst [...]

We are happier spending money on others, than on ourselves

While a great deal of studies show that people with more money are somewhat happier than people with less money [...]